The moon Triton, orbiting Neptune, has fascinated and questioned scientists for decades. A mission, called Trident, offers to study this moon more closely.

Voyager 2 is to date the first and only space probe to have flown over Neptune, in August 1989. On this occasion, the mission team opted for a short distance passage from the North Pole of the planet. In doing so, the probe could then benefit from gravitational assistance allowing it to slide towards Triton, the main moon of Neptune.

This approach (25 miles distance) allowed us to learn some things about Triton. Its diameter, then estimated between 2361 and 3107miles, was notably reduced (1715 miles). The probe also detected an area little marked by craters and coated with a very tenuous atmosphere.

NASA announced a few months ago that four potential exploration missions will compete. These were presented as part of the agency’s Discovery program, which aims to fund missions under $ 500 million.

On this occasion, a team of astronomers from the Jet Propulsion Laboratory presented their concept of a mission called Trident, aiming to fly over the largest moon of Neptune once again. But in concrete terms, if we have already been there, why return there three decades after Voyager 2 passed?

This proposed new mission is justified in several ways. Triton, on the one hand, has the distinction of not having formed around Neptune. It is a so-called “captured” moon, probably originating from the Kuiper belt. We know this because Triton is moving in the opposite direction from its planet, in an orbit positioned at 23 degrees to its equator. A new mission would then allow us to confirm its origin, and to learn more about formation and planetary evolution.

In addition, the moon also has one of the youngest surfaces in the solar system (less than 10 million years old). A mechanism to “rejuvenate” its surface must therefore be at work, but which one? The Trident mission, if validated, will attempt to solve this mystery by mapping the 60% of the surface not observed by Voyager 2.

Triton’s atmosphere is also intriguing. Its ionosphere is indeed much more active than that of other moons in the solar system, even though it is the furthest from the Sun. Another source of energy, other than that of our star, must therefore fuel this process. Again, the Trident mission will aim to determine which one.

Finally, let us remember that, like Europe and Enceladus, the moons of Jupiter and Saturn, researchers suspect that Triton also shelters, under its frozen crust, a global ocean surrounding a rocky core. Plumes emanating from the surface were indeed spotted in 1989 by Voyager 2. Sending a new probe on site would make it clear.

If approved (we will know next year), the Trident mission should be launched in October 2025. In this case, it is normally expected that the probe will arrive on site in 2038, to finally fly over and analyze the moon for 13 days.

Previous post Sore throat: what solutions to relieve it? 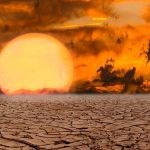 Next post If we are to meet the challenge of the climate crisis, we must act now
0 Shares