Widely used in aesthetic medicine, botulinum toxin could also be of interest in the treatment of depression.

Hyper-popular in aesthetic medicine to reduce facial wrinkles, Botox® could have other uses. According to a recent study published by the University of California, San Diego, injections of botulinum toxin could also help reduce symptoms of depression.

Science fiction? Not at all, answer the American researchers who worked on 40,000 medical reports of side effects occurring in patients who have benefited from Botox® injections. They found that patients treated with botulinum toxin (mainly for cosmetic reasons) had, on average, a 40% to 80% lower risk of developing depression.

How can we explain this surprising “side effect”? “We believe that reducing forehead wrinkles could ‘block’ a mechanism that strengthens negative emotions,” the scientists explain. Another possible hypothesis: botulinum toxin could be transported to the central nervous system and act directly on the areas responsible for mood and emotions. “Further research is obviously necessary” conclude the researchers.

Depression is a widespread disease. It is estimated that 1 in 5 women and 1 in 10 men will experience depression at some point during their lifetime. At present, this pathology is treated with the help of drugs (these are the famous antidepressants) and psychotherapies (cognitive and behavioral therapies, for example, give good results). Treatments are effective in around 70% of cases… provided that the depression is taken care of as soon as possible! 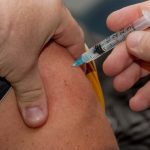