Two rocky super-Earths discovered in orbit around a nearby red dwarf offer us a golden opportunity to probe the atmospheres of exoplanets.

Researchers from the University of Göttingen announce that they have identified two super-Earths orbiting Gliese 887 as part of the Red Dots program. This red dwarf, much darker and half the size of the Sun, is located about 11 light years from Earth.

As a reminder, it is this same program that is at the origin of the discovery in 2016 of the exoplanet Proxima b, located only 4.2 light years from Earth. We should also mention the discovery, in 2018, of a super-Earth orbiting the star of Barnard, the second star closest to the Sun.

As a reminder, a super-Earth is a planet whose mass is greater than that of Earth, but less than that of our local ice giants, Uranus, and Neptune.

These two new planets were discovered thanks to the HARPS spectrograph, from the European Southern Observatory (Chile), thanks to the radial speed technique (Doppler oscillation). This is used to measure the tiny oscillations from front to back of the star caused by the gravitational pull of the planets.

In the course of this work, the researchers also noted two interesting points concerning the star.

First, Gliese 887 seems to have few stellar spots, unlike our Sun. If this star had been as active as ours, powerful solar winds would have long swept the atmosphere of these two planets if they had one.

In other words, the fact that the star is so calm could allow these two super-Earths to keep their atmosphere, why not thick enough to accommodate life.

The other interesting feature is that the brightness of Gliese 887 seems almost constant. Therefore, it will be much easier to detect the atmospheres of these two planets for future research. These two planets thus appear as prime targets for the James Webb space telescope, which is to be launched in the coming years. 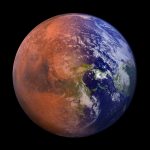 Previous post Mercury pollution detected in the bowels of the Earth 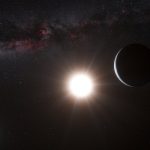 Next post Early birth of a planetary system
0 Shares