According to several experts, dogs could sense a woman’s pregnancy, especially thanks to their highly developed sense of smell. On the other hand, this ability to feel that a woman is pregnant would depend on their familiarity with the latter.

Dogs are very sensitive animals, especially when it comes to their owners or changes in their environment. For example, we know that dogs experience grief after the loss of a loved one. It is therefore only half surprising for dog owners to notice changes in their pet’s behavior when a woman in the family is pregnant.

Sometimes, some homeowners notice these behavioral changes very early. In other words, the dog would know before the human in case of pregnancy. But do dogs really have such a faculty? A HuffingtonPost article published on July 5, 2020 questioned several experts on this subject.

“Our dogs are fine observers. Their sense of smell and their vision are very developed, and it is not surprising that they can detect that something has changed when a woman is pregnant […] The chemistry of the body of pregnant women undergoes a modification likely to lead to a odor change, which may be due to an alteration in the pH balance, as well as hormonal and dietary changes,” says Mary Burch, animal behaviorist at the American Kennel Club.

“In a familiar woman, these changes in our hormones and body chemistry may be more noticeable compared to a woman they haven’t met before,” says Kate Mornement, behaviorist at Monash University ( Australia).

Thus, dogs can detect a woman’s physical changes based on her appearance but also on her smell. They can also spot emotional changes, but it would all depend on the degree of familiarity between the dog and the pregnant woman. In addition, although there are very few studies on the subject, research conducted in 2015 already raised the possibility that dogs had such a sense.

Finally, the experts discussed the need to prepare the dog for the arrival of a newborn baby. This includes making him or her listen to tapes of crying babies. It may also be useful to show the animal specific objects (ex: toy).

Indeed, the arrival of a baby is a major disruption in a dog’s routine. The arrival of the child may increase the sensitivity of the animal, so it is important to give pay attention the animal’s behavior even though the mother will logically redirect a large part of her attention and time to her child. 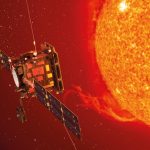 Next post Creutzfeldt-Jakob disease: a small cut leads to the death of a researcher 9 years later
0 Shares