It is estimated that one third of the population suffers, to varying degrees, from hemorrhoidal disease or hemorrhoids. What are the causes, how can it be prevented and what treatments are available?

External hemorrhoids are much more likely to cause severe pain (related to thrombosis, with a blood clot in the vein) and itching.

In any case, the presence of blood in the stool and repeated bleeding, even scanty, should prompt you to consult a doctor.

Itching, irritation, bleeding during or after bowel movements are the trio of common symptoms of hemorrhoids. Other, rarer symptoms may also be associated with it.

In the case of internal hemorrhoids, defecation is painful and an internal burning sensation may be felt. Not visible, internal hemorrhoids do not allow an obvious self-diagnosis. Pain is not an element that necessarily accompanies hemorrhoidal diseases, but it usually accompanies their complications, which can be internal or external thrombosis depending on the location of the affected vessels. If treated effectively, hemorrhoids are not medically dangerous, but the thrombosis can ulcerate and bleed after a few days.

Bleeding during or after bowel movements

Bleeding is usually mild and barely noticeable on underwear or on toilet paper. In case of bleeding, tell your doctor who can, thanks to a local examination, classify the hemorrhoids according to their anatomical position. Very often, your doctor will not be satisfied with this observation and will prescribe other additional examinations, because this type of bleeding can also be the first sign of colorectal cancer.

Sensation of inflammation in the rectum

Again, this sensation can reflect the inflammation related to the presence of internal hemorrhoids.

Discharge of mucus from the anus

A pinkish or bright red discharge may indicate the presence of internal hemorrhoids. But beware, oozing through the anus can have many origins: hemorrhoids; ulcerative colitis, ulceration of the rectum, colon tumors, atrophy of the intestinal mucosa.

Sensitive protuberances through the anus

It is normal for the veins in the recto-anal area to dilate slightly during defecation. On the other hand, when this dilation becomes persistent, it is problematic and we then speak of hemorrhoids. There are several possible causes for the appearance of these hemorrhoids. They can be favored by:

Hemorrhoids are a mild disease. However, they can lead to very painful seizures. There are many medications, often available over the counter, that help relieve the symptoms.

In state 1 hemorrhoids, the approach is based on:

If symptoms do not improve, your doctor may recommend local intervention. The techniques will be adapted to the degree of severity of the hemorrhoidal involvement.

As constipation promotes the onset of hemorrhoidal crises and accentuates its symptoms, it is essential to ensure that it is treated quickly or that it is prevented. For this, make sure to adopt a diet rich enough in fiber, low in fat, salt and pastries, and remember to drink enough water (1.5 liters to 2 liters per day). These simple measures can significantly reduce the symptoms. Foods that help prevent constipation and hemorrhoids are fresh vegetables, fruits, raw vegetables, and legumes. If needed, mucilage can help treat constipation.

Physical activity can also help reduce constipation. Ideally: walking, swimming or cycling, as these activities do not put additional pressure on the pelvic floor.

Inflammation plays an important role during hemorrhoidal outbreaks. Corticosteroid creams or ointments, which have a strong anti-inflammatory effect, provide quick relief. However, they should not be used for a prolonged period, due to the lack of preventive effect on recurrence and the risk of adverse reactions. Lubricants or protectors, which can be bought without a prescription, unlike corticosteroids, can also be used, to have a bowel movement more easily (constipation playing an aggravating role).

Considered a complication of hemorrhoidal diseases, external hemorrhoidal thrombosis can affect anyone with a peak incidence around the age of 30. Statistically, we will all have three thromboses in our lifetime.

A distinction must be made between external thrombosis, the most frequent, and internal thrombosis. In both cases, arteriovenous disorders are involved. The sudden opening of the capillaries puts stress on the vein and causes thrombosis.

External hemorrhoidal thrombosis results from the formation of a clot of a few millimeters to 2 centimeters, localized at the level of the hemorrhoids. The lesion is a very painful bluish swelling, often surrounded by edema of varying size.
Internal hemorrhoidal thrombosis is a progressive accident of the hemorrhoidal disease itself, which is characterized by prolapse. It is noticeable on digital rectal examination in the form of painful spherical masses. It often has to be operated on as an emergency.

During pregnancy, women are particularly susceptible to venous disorders. If we shamelessly evoke his heaviness in the legs, we less willingly approach his hemorrhoid problems. Doctissimo gives an update on this common problem.

As we know during pregnancy, a woman’s body changes a lot. This causes some minor but unpleasant troubles. They are usually not serious but can significantly disrupt daily life. It is mainly from the 6th month of pregnancy that the uterus is large enough to compress the veins in the abdomen. The blood circulation is then completely turned upside down and varicose veins and hemorrhoids often occur. A study reveals that in 48% of cases, pregnancy causes hemorrhoidal diseases. As for its frequency, it varies enormously from one woman to another but we are talking about at least 1/3 of future mothers who would be affected during their pregnancy.

Obviously, your baby is in no danger but the irritation, itching, small bleeding, and pain associated with hemorrhoids are not exactly pleasant. Drinking lots of water, eating fiber and fruit are simple prevention measures that can be taken throughout pregnancy.

It is often believed that there is no solution to hemorrhoids when you are pregnant. Suffering in silence is absolutely not the attitude to adopt. In all cases, consult your doctor or ask your pharmacist for advice because, when you are pregnant, you should never take any medication without medical advice. They will be able to advise you on local treatments which will relieve you occasionally. Good news: these drugs are not contraindicated in pregnancy, especially after the first trimester.

A diet rich in fiber helps to avoid certain inconveniences such as hemorrhoids. Take advantage of your pregnancy to stock up on fruits and vegetables and especially drink plenty of water, the only essential drink for your body. 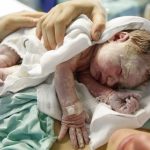